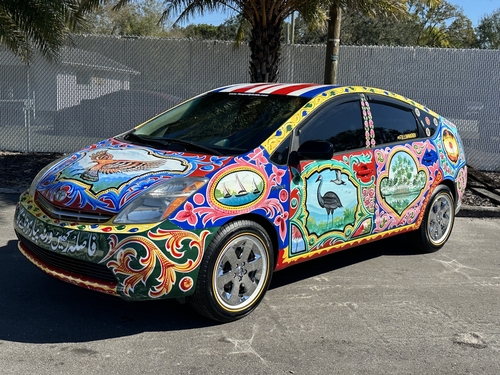 NOT FOR SALE Here is an article from The Registry Tampa Bay explaining the art and the artist. https://registrytampabay.com/the-truck-art-of-haider-ali/ There’s close to a century of tradition behind Pakistan’s colorful “jingle trucks.” For three days, I happily sat and watched paint dry. Artist Haider Ali wielded the brush. Posted beside the Museum of Fine Arts on St. Petersburg’s Beach Drive, he spent a long weekend transforming my humble Toyota Prius into a mobile masterpiece as I looked on in awe, joined by a gathering crowd. A native of Karachi, Pakistan, Ali has been lauded worldwide for his work in the distinctive “jingle truck” art style, a popular form of decoration in South Asia featuring elaborate floral patterns and calligraphy on vehicles. He visited St. Pete for the first time this fall through a partnership between the SHINE Mural Festival and my Carmada art car program. Using a handful of oil-based sign paint and a single brush, Ali deftly swirled birds and roses, mountains and filigree onto the surface of the once-white Prius. No sketch was created. All his work came straight from the brain. And it’s no wonder — the artist received rigorous training as a child apprentice, beginning study at age 7 under his father, also a master truck artist. There is close to a century of tradition behind the colorful Pakistani “jingle trucks,” nicknamed because of the jingling bells often attached to their front bumpers. Image motifs like the eagle and partridge can be seen on those painted vehicles going back to the 1920s. Ali started painting his first truck, under supervision, at 16. He went on to create ornate murals and vehicles as a traveling artist, gaining widespread acclaim. In 2002, he was invited to the Smithsonian to paint the first authentic Pakistani truck in North America. That vehicle is part of the museum’s permanent collection, and Ali, now 38, has since exhibited worldwide. He travels as much as six months out of the year to share his work at events in Europe and the States. Ali discovered the Carmada program while traveling in the U.S. this year, and we quickly connected to arrange his October visit as a preview event for the mural festival. As founder and manager of Carmada, I’ve been pairing car owners with street artists since 2013, putting all kinds of colorful and surprising art on the road. I knew Ali’s work would be special, and by choosing to paint my own car I could exhibit and promote this art at its fullest potential. Further traditional truck art motifs such as the peacock and K2 Mountain depicted along the passenger side represent Ali’s home country. On the driver’s side, Florida is represented by depictions of a sandhill crane, the Everglades, and sailboats. Calligraphy along the front bumper reads, “Don’t get too close, or you’ll fall in love” — a traditional jest often found on Pakistani art trucks. Too late — I’m already there. I renamed my vibrant vehicle Nadira, meaning “one who is rare,” and am already planning for school exhibits and art tours. Give a wave if you see us on the streets of St. Pete, and check out artcarmada.com  to learn more about our projects and tours; our next show will be part of Tampa’s Gasparilla Festival of the Arts in March. Since acquiring the car from the previous owner we had the car clearcoated to bring out and preserve the paint. We installed a Priusoffroad lift kit and installed oversized Vogue Custom Built Radials with chrome wheel covers to dress it up a bit. CARMADA brings vibrant art-on-wheels projects to public and private spaces by partnering with artists, nonprofits, drivers, and municipalities. Join our next event to enjoy art demos and hands-on fun, Carmada style. #artonwheels #artcarmada https://www.artcarmada.com/ 813 241-5307The largest selection of pre-owned Toyota Prius hybrids in the Tampa Bay area. If you are looking for a used Prius, you have come to the right place.